The Day Dean Cane Came of Age, and Kate Bramley Stole the Show

Kate Bramley and Dean Cane are the respective Queen and King of Oceania for Off-Road Triathlon, after barnstorming performances on the Snowy Mountains.

The TreX Series event at Lake Crackenback also doubled as the fully-sanctioned Oceania Championships, as well as the Australian Championships.

With so much glory on offer, it was two surprise packet wins that had the crowd enthralled.

20 year-old Dean Cane has been making his presence felt on the national and international stages in recent times, but today he truly arrived, with an upset win over Ben Allen.

Allen is the multiple-champion and most consistent performer Australia has produced in Off-Road Triathlon.

He was again dominant today taking out the swim leg by 26-seconds ahead of Matthew Pellow.

Cane was third after the swim, a full 55-seconds behind Allen.

Kate Bramley provided a similar challenger-conquers-champion storyline on the women’s side of the draw.

This time it was Jacqui Allen, Ben’s wife, who was the champion in question.

Allen is an all-time great of off-road triathlon, but today, it was Bramley who soared highest up the leaderboard to capture a memorable win.

Allen dominated the swim leg in a time of 18-minutes 42-seconds, which had her leading the women’s and also fourth outright.

“Those guys were so quick in the swim, like I swam a quick time for me, and I was still nearly a minute behind! Those guys were quick!” Cane said post-race.

It was on the bike leg that Dean Cane came to the fore, and from that point would never relinquish his lead.

Cane had competed two weeks prior at the same venue, Lake Crackenback, for the Snowies Mountain Bike Festival.

He finished second to Cam Ivory in three stages at that event, despite fighting both leg and hand injuries, and missing two stages overall.

Cane and his training partner Damien McMahon remained on the Snowy Mountains for a two week training camp between events.

“I had been setting myself for this race. Everyone always goes in to a race wanting to win, trying to win, but this time I definitely confident that I could do it.”

Cane finished the bike leg of today’s race 3-minutes at 2-seconds ahead of Allen in a breathtakingly dominant performance.

The Queensland star went on to run his way to Oceanic triumph, winning the race by 3-minutes and 44-seconds.

“It feels amazing. This means so much to me. Ben is such a great performer. So consistent. He’s won this multiple times. I’ve now just won it once. But this does mean so much.”

While the unsung hero of the day was Matthew Pellow, who came home in a magnificent third-place, with a time of 2:24:15.

For Pellow to only finish 21-seconds behind Allen, shows he has a major future in the sport. 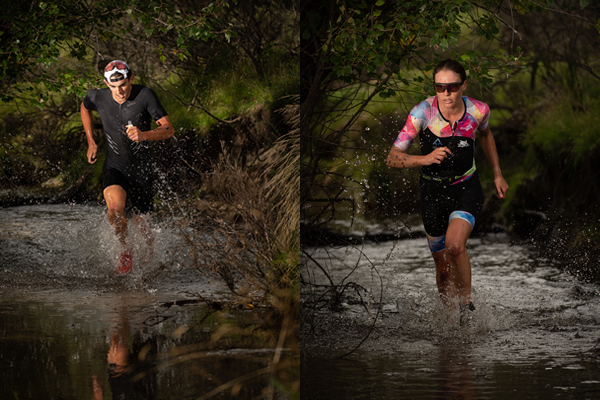 Maeve Kennedy and Penny Slater were the next two out of the water, followed by Bramley who was a full 1-minute and 17-seconds behind Allen.

Bramley, like Cane, created her race-winning momentum on the bike leg.

Allen remained race-leader of Bramley after the bike leg, but the latter was 17-seconds quicker through transition and took a half-second lead on to the run leg.

Bramley then stormed home with a run time of 51:34, to win the race 3-minutes and 20-seconds ahead of Allen.

While Slater fought valiantly to take third in 2:46:43.

Post-race Bramley said this was one to remember.

“I can’t believe it, to win here today is just amazing. It was such a strong group of competitors in the field.

“It took a while for it to sink in that I could win the race. Even on the run leg I wasn’t sure I was in front. I was scared I wasn’t. So I kept going as best as I could.

“Then when I realised I did have the lead, yeah, that was a pretty awesome feeling!”

The event is supported by funding from the NSW Government through its tourism and major events agency Destination NSW.

Keep Up to Date with In2Adventure

What a phenomenal effort by @brodiegardner current

What a sensational day here at the Sunshine Coast