Ipswich Shines as over 350 adventurers of all ages descend on spectacular Kholo Gardens, with Team Mountain Designs Victors in a Tough Hardcore Event

This weekend the adventure continued in Ipswich, Queensland's new destination for adventure, at the Mountain Designs Adventure Race Australia Qld Series event and Family Adventure Day. Spectacular Kholo Gardens proved the perfect base for some hardcore adventure, as well as a family challenge for all ages…

The day kicked off with teams in the Hardcore Course tackling a short foot leg in Kholo Gardens followed by a picturesque 3-kilometre paddle on the Brisbane River, before exiting the boats and trekking to their Mountain Bikes, which had been left at a predetermined location before the start of the race.

Team Rogue led into the water with Team Mountain Designs in hot pursuit in second, and Team Rolton in third.

Team Mountain Designs made a strong move on the first foot leg to overtake Team Rogue and arrive at the MTB leg in first place.

A tough Mountain Bike Course followed with over 20km where teams strategised to determine the best route to collect eight checkpoints. During this time Team Mountain Designs raced neck & neck with Team Rogue with only one minute separating the teams at the finish of the Mountain Bike leg. 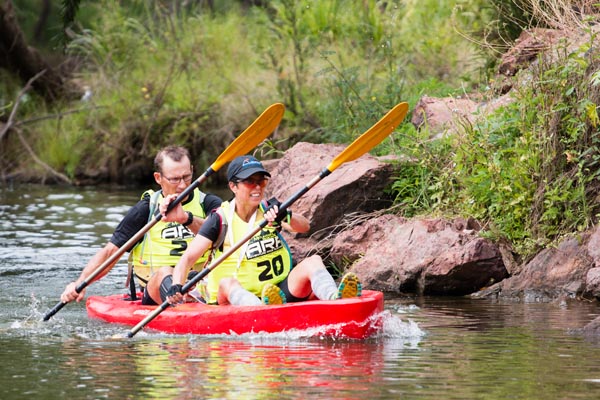 After the challenge of the Mountain Bike it was back on foot to the kayaks with another paddle back to Kholo Gardens, followed by a trek leg within the beautiful rainforest surrounds before heading for the welcome site of the finish line.

At the finish it was Team Mountain Designs in the Premier Mixed category who took line honours in a time of 3:23:25, with Team Rogue in the Male Category just 30 seconds behind in 3:23:55. Third across the line was Team Special K in the premier mixed category in 4:27:42 and in fourth was our first female team from Tri Adventure in 4:27:59.

Beginners, and those looking for a slightly shorter challenge took on the Raw Course, which started two hours after the Hardcore Race. This involved a similar course with shorter distances and less challenging terrain and navigation. It was still a tough day out though, with teams taking up to four hours to finish.

Line honours in the Raw event went to solo racer Nic Droste in a blistering time of 2:54:45 with team Topper Trouble being the first team to cross the line in a time of 3:31:32.

Time for some Family Fun 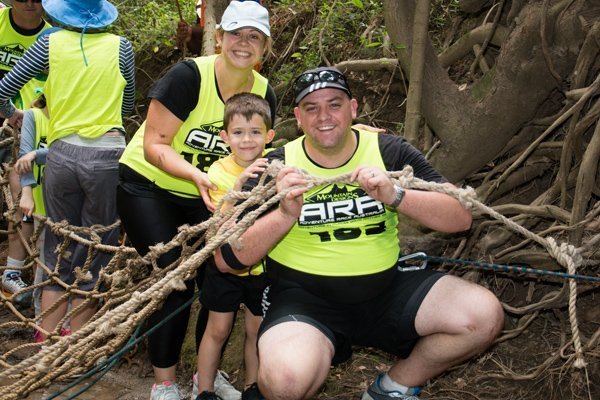 Then at 11am Kholo Gardens came to life with families of all ages donning their race bibs and tackling a fun orienteering course on foot around the park. Along the way they also tackled some fun challenges including a giant slingshot, a team ropes course with lots of mud, water and dirt and a short kayak leg, as well as some mental challenges.

Event Director Robyn Lazenby told us that "To see so many Mums, Dads and their little ones out and enjoying the outdoors and getting wet & muddy and finishing with huge smiles on their faces, was such a special experience and thanks go to Ipswich City Council and Mountain Designs for supporting the event and making it possible for us to create such a great experience for everyone involved."

In2Adventure are Asia-Pacific’s premier adventure event specialists. With a full calendar of national events scheduled throughout Australia, including adventure races, cross triathlon, XC Mountain Bike, trail runs and corporate events, In2Adventure fully embraces all things ‘off road’ and ‘off the beaten track’ and offers a unique, individual experience for all ages and skill levels. For more information visit In2Adventure here.