SNOWY MTNS, NSW | The Spectacular Snowy Mountains Tests Riders on Stages 4 and 5 of the Snowies Mountain Bike Festival and Riders Rise to the Challenge 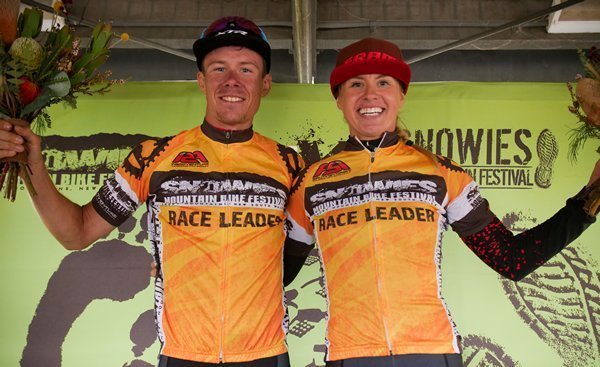 Competitors on the outskirts of Thredbo village at the infamous Friday Flat took to the skies, on the chair lifts ready to tackle stage four, a descent at speed with only gravity as their co-pilot to take them down the slopes on the epic Thredbo All Mountain Descent back to Friday Flat.

With the added challenge of winds of up to 90kmh and a wind chill of around minus six degrees Celsius, and nothing but a thin layer of lycra and sheer determination to protect them from the elements the riders braced themselves ready to “Ride Boldly” as they never have before.

Riders were met with many of the gruelling elements only the spectacular snowy mountains can offer including wind, rain and even a small hail shower, throwing up a a challenge of strength and will power that was unmatched.

Winning rider for the Elite males and claiming his third yellow jersey, Cameron Ivory, posted an unbelievable time of just over 53 minutes for both stages combined.

Adelaide based, Ivory was once again, for the third time, joined by Peta Mullins on the top of the podium, who finished the All Mountain Descent in second position behind young gun Zoe Cuthbert. However, Cuthbert fought back valiantly to take the top spot in the later stages of the race. Cuthbert finished runner up for the women and was joined in second place by another young star on the rise, Matthew Dinham who recorded two second places for the day.

In third position was Cristy Henderson, the yellow jersey wearer for the women from stage 3, and Jon Odams, the veteran Sydney based rider who continued his run as a serious threat for the younger riders coming through.

What a fantastic end to competition for day two, we are very excited to see what tomorrows Stage 6, Release the Cracken Marathon brings, and once again, congratulations to all our riders who battled the extremes of the Snowy Mountain and came out on top.

In2Adventure are Asia-Pacific’s premier adventure event specialists. With a full calendar of national events scheduled throughout Australia, including cross triathlon, XC Mountain Bike, trail runs, adventure races and corporate events, In2Adventure fully embraces all things ‘off road’ and ‘off the beaten track’ and offers a unique, individual experience for all ages and skill levels.